For Alex on his 16th Birthday

Heart On A String 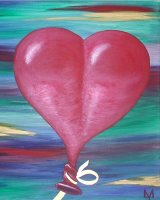 For years I kept my heart
Hidden and set apart
From pain, feeling it was best
To hide it from the rest
Protected, shielded and tucked away
Deep inside where it would stay

I placed it on a tiny thread 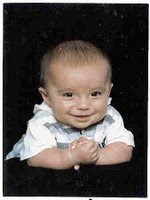 And I heard the angels sing
Since that very day you’ve had
My heart, on a string

As you grow
My heart grows with you.
When you are sad
My heart fills with your tears
When you are hurt
My heart is seared with pain
When your heart breaks
My heart shatters a thousand times
But that little string remains 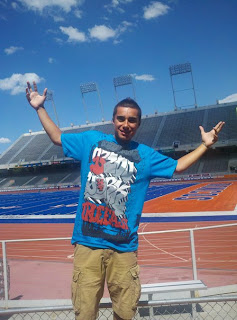 I used to hide my heart
Deep within, but apart
Until the day my world was graced
All the loneliness erased
By this tiny little being
Who will forever hold my heart on a string
Posted by Babaloo at 10:16 AM No comments:

1. How can I have a Thursday Blurbs on this particular Thursday without mentioning what happened to me exactly 16 years ago, today? Although it wasn't a Thursday (It was a Saturday), it was the day that Alex made his way into this world and the day I gave him my heart on a string. I'm not sure if I so much gave it as much as he took it from me without protest. Either way, Happy Birthday Baby Boy... Your mom loves you!

2. Construction Zone - the house is a complete mess. We started last week the task of removing all the "popcorn ceiling" from all the rooms. They are all done except Alex's room and our bedroom. What started out as wanting to buy new furniture has turned into a full time project of scraping, sanding, patching, priming and painting.

3. I started ordering stuff from my list. I ordered Jacob's mattress from Overstock. I also ordered a new monitor and an external drive for the computer. The tables and Jacob's bed frame I want to get from Ikea, so I am planning a trip up there this weekend. We are going to have a lot of items to "build" and put together before this is over. But I think I will like that part better than stepping over stuff just to get to my room. Oh, and the dust? Ugh!

4. Going to the Earthquakes game this Saturday. The game is at Stanford vs. the NY Red Bulls followed by fireworks. Yay! Oh, and we're going with Brooke and Jordan. Yay x 2! Juan will be working so we are taking Vanessa, Alex's gf, with the extra ticket. Should be fun.

5. But not as fun as going to the restorative justice appointment today with Jacob where he will be assigned his 40 hours of community service. Which? I have the privilege of paying $35 for. Yay me. Fortunately we will be going to the mall later. I am in need of some retail therapy.

6. And? Hopefully some endorphin therapy later tonight as well. Is it selfish to go to Zumba class tonight? I can start getting the dinner ready before I go and then start making the enchiladas when I get home... I will make it work. Somehow. Need. To. Go. To. Zumba.
Posted by Babaloo at 9:23 AM No comments:

1. Sometimes things just work themselves out without any help from me... something I am continually learning but seems like the first time every time. I am referring to the "mattress fiasco" that I vented about previously. They were sitting out in the street for 2-3 days, then suddenly (like magic) they were gone just as mysteriously as they arrived.

2. I have learned a very difficult lesson in watching my son suffer through a steep consequence of a very bad decision he made. It killed me not to "make things better" for him. I kept reminding myself over and over that it was his lesson to learn and prayed a lot that he would take it to heart.

4. Shedding bad habits is like saying goodbye to good, comfortable friends. You are so used to living your life a certain way and falling into those habits (over eating, not exercising, overlooking housework, drinking) at the end of the day even though you always have regrets in the morning. How nice is it to wake up and not feel like crap because I drank wine, over ate, sat around in front of the t.v instead of working out and cleaning the house? I'll tell you: This morning, it felt nice.

5. I learned that if I can still love the man I married 19 years ago then I can keep loving him for 19 more.
Posted by Babaloo at 9:36 AM No comments:

When someone is so sweet to you, don't expect that they will be like that all the time because even the sweetest chocolate expires.

If you can't explain something simply, that's mean you don't understand it well enough.

The only people who can truly know your story, are the ones who helped you write it.

Peace comes from within. Do not seek it without. – Buddha

"Hoping for the best, prepared for the worst, and unsurprised by anything in between." - Maya Angelou

The #1 reason why people give up so fast is because they tend to look at how far they still have to go, instead of how far they have gotten.

One of the hardest parts in life is deciding whether to walk away, or try harder.

Being broken gives you the ability to build yourself all over again.

Some people are like clouds. When they disappear, it's a brighter day.

Over confidence is the most dangerous form of carelessness.

1. Alex is in Boise with his team for the Region IV Championships. They have done well so far, winning their bracket and advancing to the quarter-finals. Next game is tomorrow. He is not playing and it is hard to gauge how he is doing mentally through our brief phone conversations. He can't really open up and say what is going through his mind with someone always around. I know this is hard for him, but I am hoping this life lesson will stay with him and he is able to learn from it on his journey into adulthood.

2. The mattress - as alluded to in yesterday's post, someone (that I probably know or have at least seen) dumped their nasty mattress set on top of our "large-item" pile that we put out in the street for a scheduled pick up. A pick-up that I will not only pay for, but one that allows for only the items that I pre-arranged to have picked up. NO MORE than what was on their list. There was only "1" mattress (ours) that was supposed to be picked up, NOT 3. So, what did the haulers do when they saw two extra mattresses ? Exactly what they said they would do in the agreement that I made with them. They left 2 behind. One from the sneaky free-loader and ours. They ended up taking the wrong mattress. Ugh! People! Really? Stop leaving your unwanted crap for me to deal with. I have enough unwanted crap of my own. Seriously. I hate you.

3. Soooo... the dognappers, both of them, are out of jail. I was walking with Nico on Tuesday and I saw one of the guys walking up to his house. I confirmed with the D.A. yesterday that both guys are "not in custody." I got as much information as I could from the D.A.'s office, but I still don't feel safe in my own neighborhood. At least now we know their names:
1) Emilio Romayor - this guy apparently plead guilty to the charges, served a month or so in jail and is now on probation. Not just any probation, "mental health probation." The only clear definition I got from Mr. Shapiro (Misdemeanor Supervisor at the D.A.'s office) was that this is the highest level of probation there is in terms of keeping an eye on the individuals. He has to report to court regularly and show that he is fulfilling the terms of his probation. He will have to do this for 3 years. This was the long/shaggy haired guy in the white t-shirt.
2) Alejandro (probably goes by Alex... *sigh*) Banuelos - this was the scary guy (shaved head, tear-drop, neck and all over arm tattoos) that was supposedly on parole. He did not plead guilty and has a pre-trial conference scheduled for July 26th. He is being charged with "Theft" and "Driving on a suspended license." There might be some repercussions with his parole if he is found guilty on these charges. I really hope they call me to testify.

4) The boss is out today and tomorrow. This means a very relaxed and enjoyable work environment. It is amazing how much more productive we are when she isn't around. Half day tomorrow and working on a productivity schedule that will knock your socks off!

6) The house is cleared out of our old living room furniture. Juan wants to paint, we still haven't even looked at colors.. so I don't know how that is going to work out. I will probably get Jacob's bed and dresser first, since that will take an effort to put together. Not to mention cleaning out his stuff and his floor. UGH! Too much work. Can't wait to have new furniture though!
Posted by Babaloo at 9:25 AM No comments:

1. I have learned that people, at least one person in my neighborhood anyway, are mindless, opportunistic leeches who dare to sneak out of their wormhole in the middle of the night and put out their unwanted junk on top of my unwanted junk, that I paid to have removed, and then leave me with their mess to clean up when the haulers don't pick up their crap because it wasn't on MY list of crap to pick up.

2. I learned that the son-of-a-bitch-dumb-ass-tattooed-up-gang-banger-parole-violator who kidnapped my dog... Is out of jail. I also know his name and his little friend's name too. If he tries to take my dog again or messes with my kids, car or property... well I don't know what, but I'll do something.

3. I learned that predilection is a noun and means: A preference or special liking for something; a bias in favor of something. Thank you Nora Roberts and Kindle for enlightening me.

4. I learned that I like to listen to Christian Rock music. Who knew?
This is one of my favorites that I have discovered: