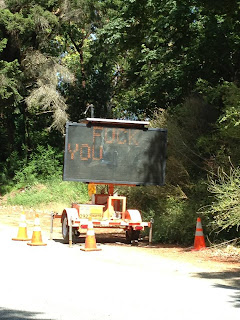 I saw this sign on Highway 9 in the Santa Cruz Mountains. Please "caption" this photo for me.
Posted by Babaloo at 3:27 PM 3 comments:

Well. It didn't go exactly as I had written it. I tried to slap him. I wanted to slap him really hard across the face and really shock him. I ended up barely grazing his cheek with my fingers. I think the shock value was enough. I got his attention anyway.
I said the first part, and most of the second part about how he can't walk all over me and expect me to take it... but lost my train of thought after that. I ended up telling him something like how my love for him is a burden to me these days instead of a joy. I told him no matter how cool he thinks he is and how many friends he has that what he is doing is wrong. At one point he started to walk away but I told him not to walk away from me. He was mad and very defensive in his posture. I hope the message was received.
I asked him later if he was going to offer any apology to me or to his dad and all he said was, "well I was." I told him I'd be ready to listen when he was ready to put an appropriate apology into words.

Ugh. This kid. He is truly breaking my heart. Just when I think I am all cried out and have reluctantly accepted the inevitable. He manages to step all over my heart again. Again. And? Again.
He turns 17 in 3 weeks. I only have a year left to convince him to get on a better path.
Posted by Babaloo at 3:00 PM 3 comments:

Slap heard 'round the world

"SLAP" - Right across the face.

That is for sneaking out of your room last night and not coming home all night.

How dare you sneak away from here, knowing everything that you know about this area where we live. Knowing that I am at home not being able to sleep worrying about you and wondering if I am going to get a phone call from the police saying that you have been injured, killed or have been arrested. Knowing that I have to get up  early for work in the morning. How dare you do that to someone that has nothing in their heart but love for you.

There is nothing you can do that will ever make me stop loving you. But that doesn't mean that you can walk all over me, use me, tell me your lies and expect me to roll over and take it. Do you feel any shame? Your behavior is shameful and you should feel small and embarrassed. How dare you do that to your mother.

My opinion of you is becoming lower and lower by the day. I hope some day you will think about that and take steps to make sure I have a higher opinion of you and the kind of person you are. Personally? I don't care to be around anyone whose mother has low opinion of them. To me that says a lot.

You didn't fall asleep at your friend's house. You were up on Facebook all night commenting on and "liking" statuses. You knew, we knew, you were gone. Your dad tried to call you. You can say anything you want to say, but I only care about your actions. Your words at this point are only noise. You need to grow up. You can start giving me an apology.

Beyond that you need to do some soul searching because what you are doing isn't right.

This is my plan. Wish me luck.

The Proactol Plus Experiment

I have seen my weight fluctuate all of my adolescent and adult life. At my healthiest and most fit I was at around 140 pounds. This is a weight I am very comfortable with and is healthy for my 5 foot 6 inch frame. Throughout the years I would hold on desperately to maintain between 145 and 150 and still feel good about myself. When my weight would get to be over 155 one of two things would eventually happen. I would either get pissed off enough to cut out the bad habits that were putting on unhealthy weight or I would sink into a depression and give up all together. It was the latter choice that I found myself dealing with more and more often as I approached my mid-40's.
As I got older the bar of my acceptable weight began to rise.  Instead of 155 I would find myself at 160. I would get upset and get back to 152 only to give up again when I couldn't get below that mark. I gave in to triggers and was guilty of being a stress eater, eating to self medicate or eating for comfort. As good as those endorphins feel after a great workout, there are is always the voice in my head that convinces me it is equally good to open a bottle of wine, surround myself with yummy comfort food and block out the world..  Earlier this year (after nearly a year of neglect) my weight hit an all time high of 180. My size 14 pants were too tight and I was miserable. Even typing that number doesn't seem real.  Carrying that much weight made me feel so unhealthy and sad. The sadness was reflected in my everyday life and I began to give up hope. This has been my burden to bear and I know that it is up to me to find my way back.
Since the end of March this year I have gotten back on the wagon with my eating choices and fitness regime. I eased back into things by giving up one thing (bad habit) each week. The first thing I chose to give up was alcohol. The second week I gave up sweets. The third week I gave up starchy, fatty foods like potato chips and anything deep fried. I began exercising again at the YMCA and when the weather finally turned, I got back out on my bike.
I lost a couple of pounds each week and by the first of June I had lost 15 pounds. During this time I began researching fat burning supplements. I liked the idea of something in my system that would help in burning up the fat or increasing my metabolism. I didn't want an appetite suppressant because most of them contain caffeine. I gave up caffeine years ago and don't need it in my system anymore to increase energy or help me to be awake and alert. I have been able to sleep so much better at night since being off caffeine which makes the trade-off so worthwhile to me. In my research I found a website that rated different fat burning supplements and published their findings in a top ten format based on their research on actually using the products.
http://w8loss-tips.com/weight-loss-pills-reviewed.php
http://www.weightloss-hq.biz/diet-supplements/the-ultimate-top-10-fat-burners.html

I was originally curious about a product I had seen on TV called Quick Slim which claimed to be a fat burning supplement but I was quickly drawn to the number one product on their list which was Practol Plus. Proactol Plus claimed to burn and block fat in addition to reduce cravings and appetite. I wanted to try something that would help give my diet a boost, especially when I hit that first weight loss plateau. I read up some more on the product and decided to give it a try. Here are my results so far:

Week 1 - After being stuck on a weight-loss plateau for three strait weeks (stuck at 165) I was able to break through and have a loss of two pounds the first week using Proactol Plus. I really didn't do anything different in my routine, I even indulged a couple of times more than I had in the previous weeks. I started taking the pills on Thursday (5/31) and in the 7 full days on the supplements I have gone from 165 to 163 pounds. Highlights from the week include: A long bike ride on Saturday followed by eating out that evening and had two glasses of  wine and sushi for dinner. I exercised on Tuesday at the YMCA (elliptical and treadmill) and over indulged on Monday eating some chips, a few cookies and the bacon quiche I made for dinner. On Wednesday I did not workout and ate 4 cookies (which isn't bad but over-indulgent when trying to lose weight). Other than that it was the usual routine of oatmeal in the morning (except Saturday and Sunday when it was Grape Nuts), a fruit and dairy snack mid-morning (berries and non-fat milk), a frozen Lean Cuisine type frozen lunch followed by a lite version (smaller portion) of what ever was for dinner that night.
Posted by Babaloo at 2:50 PM 2 comments: